My school district open it’s doors to students on August 15, 2016. It was my 13th year in a leadership role overseeing opening of school as a technology leader. Anxious parents, new students, excited teachers, and leaders throughout the district work together to ensure it was a good first day. And in all the years I have opened schools from a district office perspective, this year was by far the best.  The network was ready as were the classrooms due to the collaborative effort of two departments dancing all summer long.  The Maintenance Department and Dublin Unified had the best summer in the history under their Director Mike Benzien. The Technology Services Department also had the best summer and much of that can be attributed to the staff themselves.

Our calendar changed in the winter and we were notified we would have one less week to prepare for 2016-2017 school year during summer. Mike and I began to meet in early February and map out how we could achieve the goals of opening school as well as adding six brand new classroom buildings to one of our middle schools.  We also moved all of our professional development to the Nielson Ed Center as a result of these early meetings. We spent the spring preparing that site with 3 to 4 new rooms that could accommodate up to 200 teachers for their professional development.  It has become one of the projects that Mike and I are most proud of as leaders of the district.

When I notified my department of the news that we would have one week less during summer you could imagine they were quite distressed envisioning the task at hand. We knew we needed a new approach to the work and I went to them directly for the solution.  I picked three team members all with a unique skill sets to plan how to approach the summer work as a team and achieve more tasks in less time.
The trio met a couple of hours and came up with a wonderful approach to the summer model. Each department member would partner with another in a very specialized areas as follows:

They worked with each member of the 11 person department to determine who wanted which team. And with cherry picked student workers we began a journey as a new department working with a focus on projects and everybody in a leadership role.

On a daily basis we had to pivot and shift based on the needs of the Maintenance Department. We also moved around a lot based on our own progress in our specialized teams. There were days that a site was not ready for imaging yet, so we shifted and moved to other sites or reassigned projects for the day to team leaders. There was a lot of fluidity on a daily basis and also required flexibility occasionally hour by hour.

Not only did the Maintenance Department finish one week early, but the six new classrooms were done.  Our department worked right up to the Sunday prior with key staff fine-tuning rooms to ensure the readiness for day one. The feedback we received during the first week of school was like nothing I have ever experienced in any year prior. All of the small stuff that we accomplished like removing antiquated technology, plugging holes, fixing wiring, cleaning runways, and little touches like remote controls attached with a bungee to every TV seem to be noticed by many of our teachers and staff.

I know not every district has the ability to have the manpower we had this summer with student workers, but I am convinced that a team approach with all members of the team in leadership roles is the way to go to accomplish goals. This model will be the new way our department works as a group on a daily basis. As I tell them often, we are one team each with areas of specialization and we complement one another skills with an awareness of what our limitations are and what we bring to the table. 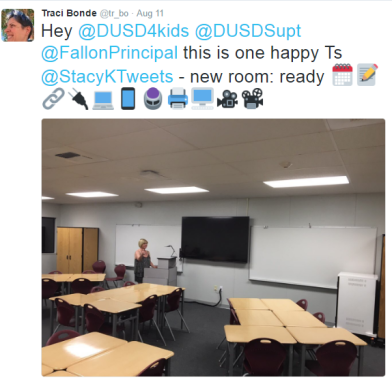 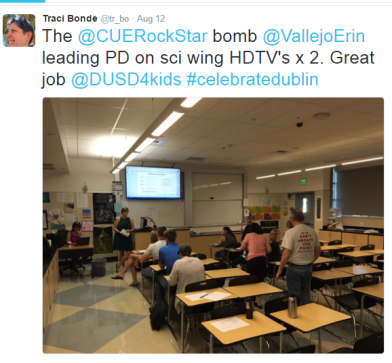