In the world of technology integration and education the focal point is often teachers. The school leaders a.k.a. Site Administrators are generally overlooked although they often lead all initiatives.  In Dublin Unified, there is a team of elementary leaders hungry for technology use that is meaningful in their daily work.  School Administrators rarely have time to hunt for resources that will make them more efficient.  In the spring of 2015, Holly Scroggins and myself began an initiative to create a monthly timeframe dedicated to technology integration use for Elementary Principals.  Once a month, our site leaders close their doors, turn on their computers or chromebooks, and join a Google Hangout with one another for one hour in an open forum. (Dublin is a GAFE district, if we used Office365, we’d do these meetings via Skype) 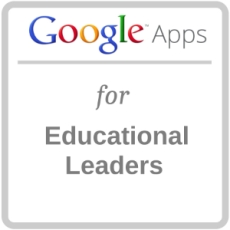 There is no set agenda, and the time is meant to be used learning the ins and outs of Google Hangouts for meetings and the overall experience of using technology in a natural way in their own environment on their own hardware.  My observations during this time are as follows:

At the beginning of every Google Hangout, at least two of the Administrators are struggling with their cameras and/or their audio. I will watch them call one another and troubleshoot through the challenges. And yes, you may be asking, why is the Chief Technology Officer only observing?  My style in leading professional development is to often stand back and let it play out. I am not the only expert in the room and by their ability to support one another, I often learn new things too.

The topics we discuss are not as critical as the time spent troubleshooting and exploring the computer for their needs as Instructional Leaders.

Yes, we often deal with some nuts and bolts while we are laughing and having fun with one another which is an invaluable professional development opportunity in and of itself.  We have successfully participated in roughly 5 Google Hangouts as a team since the spring.  Dublin’s elementary school Principals now know how to create a Google Hangout open a Google Hangout, troubleshoot through a Google Hangout and deal with logistics during a mobile meeting that occurs for a set timeframe.

I’ll report back on what we discover after we do our next Google Hangout, scheduled for February 2016. Here are some resources that you can pass along to your district leadership:

How Educators and Schools Can Make the Most of Google Hangouts